Gold VS Bitcoin: Which is the best investment?

Bitcoin is often compared to gold for its ability to protect against inflation. But between gold and Bitcoin, what is the best investment to make? For

Bitcoin is often compared to gold for its ability to protect against inflation. But between gold and Bitcoin, what is the best investment to make? For billionaire Paul Tudor, it's clear: Bitcoin is a better investment than gold ...

Are you looking to invest in a safe haven against inflation? Do you want to buy gold? Billionaire Paul Tudor prefers to bet on digital gold, Bitcoin ! 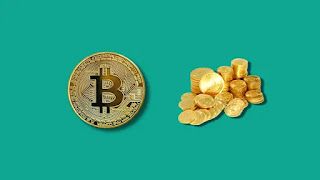 Paul Tudor is the founder of Tudor Investment Corp., an asset management company. He spoke on CNBC on Wednesday October 20 and spoke about all the good things he thought about Bitcoin. During the interview, he expressed concern about rising inflation. He also said he preferred to invest in Bitcoin over gold to hedge against inflation . His opinion is also reminiscent of that of billionaire Carl Ichan .

'Obviously, there is a place for crypto. Clearly, she is on her way to winning the race against gold right now ... I would [crypto] prefer her to gold right now. 'Paul Tudor, founder of Tudor Investment Corp.

The price of Bitcoin in madness!

This intervention comes at a time when Bitcoin is soaring! The price of Bitcoin has indeed just set a new record, reaching $ 66,498 . Unsurprisingly, altcoins follow the bullish movement of Bitcoin. At the time of writing this article, Ethereum, Solana or even VeChain have prices up more than 10%!

'I think a better way to enter [the crypto market] is to own physical Bitcoin, to take the time to learn about investing in Bitcoin ... I think the ETF would be good and the having it approved by the SEC should bring great relief. (...) I think crypto is gone to stay 'Paul Tudor, founder of Tudor Investment Corp.

The reason for this bullish movement? In large part, the rise in Bitcoin is due to the launch of the first Bitcoin ETFs in the United States . These funds offer new opportunities for investors to get into Bitcoin. Indeed, they allow you to invest in Bitcoin without having to buy it .

For his part, Paul Tudor advises buying Bitcoin rather than simply betting on trends in its price via an ETF. Whatever your preference, one thing is for sure, Bitcoin will continue to rise in the coming weeks !